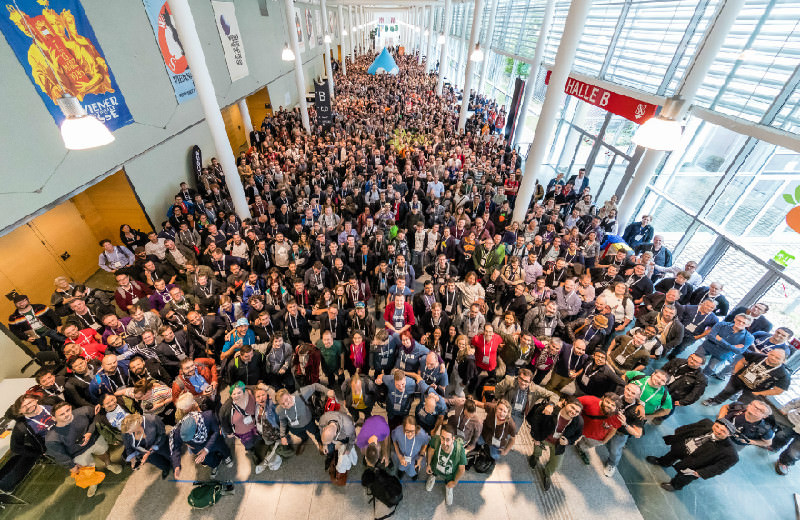 Drupal has a very powerful and large community, and we have seen it once again in Vienna, Austria's capital city, where the Drupal community members, mostly from Europe, but also from other corners of the world, held a magnificent event. We decided to found Drupart after attending DrupalCon Prague in 2013, so Drupal conferences have a very special significance for us.

Drupal conferences offer a lot of value: they provide insights into the latest Drupal plans and developments, give the opportunity for networking with the community members, offer new technical gains, and perhaps most importantly, Drupal conferences refresh our enthusiasm, trigger new ideas and solutions and boost our motivation. We are also planning great new developments for Drupart.

On the first day of the conference, keynote speaker Dries Buytaert  shared a lot of important information on the current status and the future of the Drupal project. Shortly put, Drupal is growing and changing.

Everyone knows that during the transition from Drupal 7 to Drupal 8, there have been some problems and delays and people started using other technologies instead of Drupal, but even so Drupal continued to grow and expand.

The total number of issues fixed or closed on Drupal.org for both core and community developed modules increased by 22% in 2017. This clearly shows that more work is being done for Drupal 8 now than in 2016.

Similarly, the number of individual contributors who develop or support modules on drupal.org increased by 28%, meaning more users are actively participating in the Drupal project.

Companies' support for Drupal projects on drupal.org also increased by 26% compared to the previous year. Organizations contributed to the improvement by providing financial support to the developers and by including Drupal projects in their developers' work schedule.

The survey conducted among Drupal agencies in 2017 provides more insight into the current situation. According to the above data, almost half of the Drupal agencies developed in terms of both capacity and sales. So 5 out of 10 Drupal agencies grew their business and increased their revenue in 2017.

Besides the contributions and businesses growth, Drupal 8 usage has also increased. 38% of the surveyed agencies stated they use only Drupal 8 for their projects and 25% declared they use mostly Drupal 8 but also Drupal 7. This shows that Drupal 8 is now more widely used. At Drupart we have been using Drupal 8 for our projects for quite some time now.

There are many modules actively used in Drupal 8, such as Panels, Ctools, Commerce, Search API, Token or Pathauto, which contribute to a faster development of other modules. However, there are also modules which are not yet actively used, waiting to be developed and tested, for example the Rules, Organic Groups, Backup & Migrate and Feeds modules are not quite ready for Drupal 8.

Developments in web technology impact Drupal's vision and plans and as such Drupal is also transforming in parallel. Because of this, new questions arise regarding Drupal, such as who is Drupal for or for what projects it is suitable. In fact, this is not affecting just Drupal, but content management systems (CMS) market in general. Simple websites with no complex user interaction, such as blogs, landing pages or portofolio websites, can be created using SaaS (Software as a Service). As such, content management systems have to position themselves more accurately.

Promotional websites can easily be created with online tools such as Wordpress or Wix, but there are now higher expectations from a CMS. Content management systems are no longer used just to create and manage simple websites, but must also include complex features to meet the needs of enterprise level markets. Drupal has also changed in this regard, especially Drupal 8, and is now considered a too expensive platform for managing simple websites.

In his presentation, Dries mentions that it is now more costly to use Drupal than SaaS for simple web projects. Drupal, especially Drupal 8, is a structure with multiple features, optimal in situations where flexibility and complexity are required.

Drupal evolved into a platform focused not on websites with a lot of reach (traffic), but rather on websites which require a lot of richness (complexity, flexibility, integrations). The issue mentioned in the above slide is exactly that - REACH versus RICHNESS - Drupal is a CMS better equipped for developing and managing complex, multi-functional and responsive websites with different integrations (e.g booking systems, e-commerce systems, customer support tool).

Another important topic discussed at the conference was in regards to "decoupled (or headless)  Drupal". The idea is to use Drupal for the center part, while managing the front-end with other technologies, such as Node. js, Vue.js or Angular. This method is not widespread at the moment, but a serious forthcoming trend towards these technologies is anticipated, which is why Drupal is preparing for the future.

In a project like Drupal, there can be different needs and demands in every segment. In the image above you can see some of the complaints and demands regarding Drupal 8. The following are not included in the project’s strategic objective and will not be amended:

There are also other complaints, such as:

Work is being done to correct or improve the above mentioned issues in the near future. A new and modern management panel is currently being developed and we were shown some examples of this during the conference, so we can now say for sure that a very good management system is being developed. This project is still in the testing phase and will be added to Drupal in the future.

Another issue is the updating process. Though it is possible to make updates via Drush or the admin platform, 59% of the websites are manually updated by downloading the updates from drupal.org. There is a need for improvement in this area, so automatic updates are in plan for the future.

Once again, DrupalCon proved to be a major source of motivation and a catalyst for new ideas and developments for the Drupal community. It has also shown us that Drupal continues to overcome obstacles and challenges in a fast-changing market, so we can say for sure that it’s on the right track.

Drupal is ready for the future.